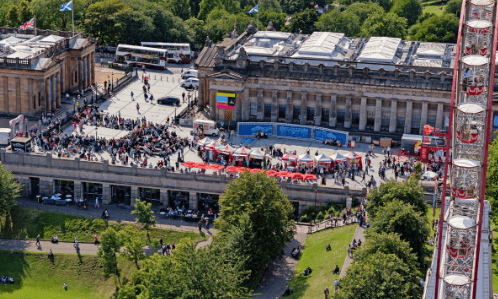 For the people of Edinburgh, the long month of August is almost over and the Festival begins to pack up for another year. So what did the cats at Hot Tin Roof enjoy this year? We look back on the nights out on the tiles and the shows we liked this year. Here’s what we have seen:

I’d genuinely recommend Massaoke for those who love a good singalong to cheesy tunes and a boogie into the wee hours.

I went to see Irish comedy trio, Foil, Arms and Hog, they were actually quite good and the show in the McEwan Hall was a spectacular venue.

Jason Byrne: You Can Come In, But Don’t Start

I also saw Jason Byrne the other week too. He was really quite funny and it was a very popular show.

David O’Doherty: You Have To Laugh

One of the first things I saw this year was the Irish comedian David O’Doherty – without a doubt the most laugh-out-loud person I’ve seen at the festival.

‘Dear Diary’ in the Banshee Labyrinth sees a girl reading from her 14-year-old diary. Her parents were in the audience the night I was there, which made it all the more awkward and hilarious. It’s part of the free fringe and the venue was great too!

The Sisters of Castleknock House

I’d also definitely enjoyed a play that was on at the Royal Society on George Street, called ‘The Sisters of Castleknock House’. It starts off as a typical comedy, but things get increasingly bizarre and darker as it goes on and the story unfolds.

I love books so I had tickets to see Ali Smith at the Edinburgh International Book Festival who was in conversation with First Minister, Nicola Sturgeon, also an avid book lover. Ali Smith is one of the great Scottish writers living today and she talked articulately about the power of novels and their relevance in the world today. She also spoke about her love of the renowned Scottish writer Muriel Spark.

Light on the Shore

I’ve not been to anything apart from music events this year and both of these have been at the rather wonderful Leith Theatre. The events have been part of the ‘light on the shore’ line up.

First up was Neu Reekie #1 – a selection of short films and four acts including the last ever performance by Scottish post punk legends the Fire Engines. They sounded as relevant as ever and lead singer, Davey Henderson, was sporting a smashing foil space poncho and pink underpants combo for the event. The headliner was Michal Rother from the band Neu – also excellent – space rock and motorik beats.

The second event was a gig headlined by more Scottish indie legends, The Jesus and Mary Chain. They are a lot more competent and slick than my first encounters with them in the 80s and the volume seemed a bit on the ‘polite’ side but they played a great and varied set although I would have liked a bit more from ‘psych candy’ personally.

The real star of both shows though was the venue. Perfect mid sized place (something we are lacking in Edinburgh), which is easy to get to and sounds great acoustically. It’s also easy on the eye. Let’s hope that it remains a place for us residents to go after the festival goers have packed their bags.

Lolly Jones: 50 Shades of May

This year I went to see Lolly Jones: 50 Shades of May and it was hilarious! It is satirical comedy and burlesque show all rolled into one with some uncanny impersonations of some of the UK’s finest* female politicians, not just Theresa May, but Angela Eagle, Ruth Davidson and Nicola Sturgeon. The List gave it a 4 star review so there’s a seal of approval right there.

*Depends on your political persuasion.

What Girls Are Made Of

I’ve also went to see What Girls Are Made Of at the Traverse Theatre. This was amazing and I am no theatre-goer. It is a fast paced, nostalgic trip down memory lane for former lead singer Cora Bisset, based on Cora’s diaries from her late teens found recently in her parents attic. The musical stage production retells the highs and lows of Cora’s band days with Darlingheart’s – a now forgotten Scottish indie band from Fife who shot to fame quickly, only for it to come crashing down 18 months later. A highlight of the Festival and I hope she takes the production around the country.